Was looking for a little vintage purse to carry for my sister’s wedding and I found some other goodies as well. I came across this arrangement of violins and thought they would be a beautiful hanging together on a wall in someone’s house: 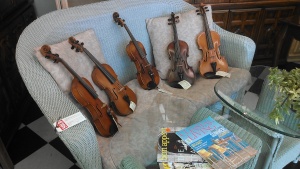 Then I hit the boxes of photographs that I love so much. This one caught my eye immediately: 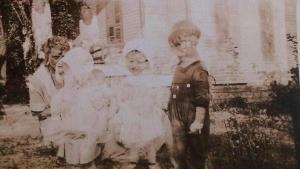 From the mother’s hairstyle, I would say this is a 1920’s photo. What I thought was so interesting is that it’s a double exposure (probably accidental). There aren’t twins dressed in the little pilgrim style, it’s the same girl after she’s moved. What’s so cute is that the fainter image of the boy shows him rubbing his eye…was someone crying?

I tend to be drawn to photos of babies and small children, beautiful girls (awesome for historic costume research) and handsome men. But, mostly, it’s the babies and tykes: 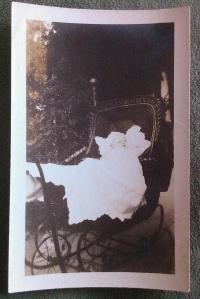 The little boy’s hat with the two pom poms on either side, adorable! The babies in prams, so cute…

And this little one, so serious with the ringlets:

A lot of vintage photos are mounted on these card stock “frames”, usually with the photography studio’s information somewhere on them. They’re often called “cabinet cards“. While they’re not great for the photograph itself (acidity in the card stock), they are helpful in placing the location of the studio (and, thus, the area where the sitter was from) and, with a little research, can narrow down the time period as well. This one is from the E. D. Baily Studio in Tamaqua, PA. From the embossing and card stock, this photo could date as early as 1890. Children’s fashions are a little harder to place, with a general unisex look for much of the Victorian and Edwardian era for babies and toddlers. I do know that this is a little girl as her name, “Lillie”, is written in pencil in a beautiful hand on the back of the card. An advantage of a cabinet card is that it ensures that it’s not a photo reprint. An unscrupulous dealer can create a negative of an original photo by taking a new photo, which would allow unlimited reprints to be sold as “vintage”. On loose images, one should check the paper stock, it should be faded and any creases or damage to the front face should be evident on the back, if you don’t see that, it might be a duplicate. I don’t worry too much about these as I’m only spending 50 cents or a few dollars for them, but I do like to have original prints. Another way to know it’s original is seeing black paper still stuck to the photo, or black tape across the corner(s). This shows it was mounted into a scrapbook at some point. As such, they should be on the surface, you should be able to feel them when you rub your hand over them. This could, of course, be faked, but I don’t know anyone who would bother for such a low cost item. If you were buying a photo of a famous person, one that you’re being asked to spend more money on, you would want to check these things. Celebrities in particular would often have hundreds of prints made, some with a message already scrawled on the front, ostensibly by the star. If the signature is on the surface (move it around in the light, you should see the ink sitting on the surface) then this may well have been done for the star’s convenience. If the whole image, writing and signature included, looks the same under the light, then you know that the whole thing is a copy of an original. It still might have been an original publicity item, but isn’t as special as a signed image, or one dedicated and signed. Then again, some of these celebs hired staff who would sign fan images for them…caveat emptor!

Finally, I came across this tiny treasure. I’m not terribly keen on the image, badly framed snapshot, but the size is great. I have a modern stamp here to show how small it really is:

So, did I find a purse? Yes, yes I did. I’ll post pictures once I get some of me carrying it in the wedding. 🙂

Posted by letusbesweethearts on May 20, 2014 in Vintage Beauties